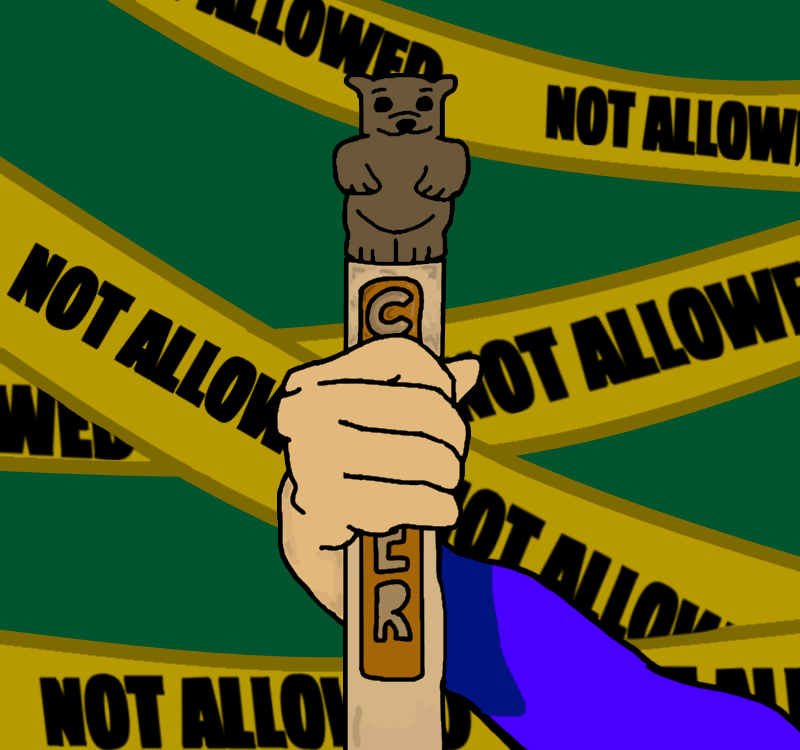 It was a dark and tranquil night. Garrison field shone brilliantly through the still air and the faint glare of the moon. At a first glance, all was as it should be. However, with a closer look, one could see shadowy, bold figures hiding near the uprights of the football field. Hearts were racing, and the tension was almost palpable.

A few minutes later, these shady individuals walked onto the dimly lit field, carrying a tree and a large bucket of concrete. That night, the West Jordan Jaguars planned to cement a tree into the center of the football field. But the Copper Hills Grizzlies were not oblivious to the plan. They were ready to defend their Grizzly territory. At the head of the small band of mysterious figures was Scott Pace, the mighty Spirit and Pride Officer of 1995.

Pace and his posse ambushed the Jaguars and stole the infamous tree, thwarting their devious plan. Once again, the Grizzlies were victorious.

The tree was taken to sporting events following the incident. Yet, it wasn’t until Principal Garrison convinced gate supervisors that the tree was his walking stick, that it was actually allowed into the stands. Later, the tree was shaped into what is now known as the beloved Spirit Stick. Wielded annually by each subsequent Spirit and Pride Officer with great honor, the renowned billet held the foundation of Grizzly pride for over twenty years. Decades of history rested within the stick, as students past and present viewed it as a beacon of dignity. That all changed, one dark and stormy night when the spirit stick was taken out of the game.

On November 18th, 2021 the Region III board banned all spirit props, including the distinguished Copper Hills Spirit Stick. Surprised SBOs and students alike wondered what would become of their state-of-the-art student sections without the stick to guide them to victory.

Upon learning about the bad news, Spirit & Pride Officers and SBOs campaigned for the return of the sticks, crashing meetings and composing emails, trying to gain support for their cause. Some even went as far as meeting with the Superintendent.

A week later, Region III Chairman and Herriman Principal, Todd Quarnberg, announced the reinstatement of the Spirit Stick, conditional that it no longer be used to bang on the bleacher or floor. It seemed as though the SBOs’ work with Jordan School District was a success. However, Quarnberg questionably implied that the decision to reinstate the sticks was not influenced by their JSD superiors. He said, “Though we respect the hard work of our JSD Administration and School Board, this decision rests with the Region Board of Managers and not Jordan School District.”

If the Region Board has the power to ban the sticks, why did they allow the sticks in the first place? Copper Hills students wondered the same thing. The Spirit Sticks have been used for years, so why the sudden removal? Until the sticks were reinstated, many were unaware that the Region Board had the power to remove them. In Quarnberg’s announcement, he stated that the Spirit Sticks were banned on the grounds that banging the base of the stick on bleachers could cause damage to school property. He also noted that “The Region Board of Managers do [sic] believe the noise created with a Spirit Stick can be made louder than noise made by students stomping or jumping in the bleachers. Therefore, the Spirit Sticks will be categorized as ‘artificial noise makers’ (UHSAA State Handbook, p.80). As such, Spirit and Pride officers must agree to cease the use of Spirit Sticks for noise making as required by UHSAA regulations.”

The spirit props were banned on the basis of being “artificial noisemakers,” yet many other school traditions frequently used during games are also banned by UHSAA. Banners of any kind, except for sponsorship or welcome, are not allowed at sporting events, including banners for a team to run through. Pom-poms are allowed only at specific sporting events, and cannons are explicitly prohibited, even though Herriman High uses one to launch t-shirts. Baby powder during half-time is used at Copper Hills outdoor events and confetti or chalk is utilized by Bingham and Herriman. Flags make regular appearances at sports games, but the UHSAA Handbook only currently allows one, exclusively at state competitions.

High schools other than Copper Hills participate in unlawful behavior, including having Spirit Sticks. Both Riverton and Bingham have their own types of sticks. Ironically, Quarnberg identified that the decision to remove the spirit props was solely centered on the Copper Hills Spirit Stick. He writes, “Currently, there is only one Region 3 High School that has a Spirit Stick tradition. Therefore, we will address the issue raised by Copper Hills High School… We will recognize all Region Spirit and Pride Officers in this letter as individuals supporting Copper Hills High School.”

The validity of the Spirit Stick fiasco is uncertain, but the meeting standards raise even more questions. According to Craig Hammer, UHSAA Executive Committee Chair, all region board meetings are open to everyone. Yet, some SBOs believed the meeting was private and not open to the public. The meeting minutes are nowhere to be found.

Joey Coleman, the ‘21-’22 Spirit & Pride Officer believes that the suspicious meeting reflected the leaders’ views of the student body. “There was no communication to the students. And that’s the biggest thing. There was no trust for student government; there’s no trust in students.”

The Copper Hills Spirit stick has had its fair share of contention. It was broken in 2012 and once again in 2021. However, the spirit of the stick can’t be denied. Coleman commented, “It’s more than just a stick of wood… It’s the soul of Copper Hills Students. It’s the soul of chaos, and they took that away from us.”

The Spirit Stick allows the student body to come together and speak with one voice: a voice of strength, unity, and pride. Whether or not the stick should have been taken away is still up to debate. Either way, one cannot deny the intense energy that it commands‒a role that began over twenty years ago and still remains today.