The Deal With Web Filtering 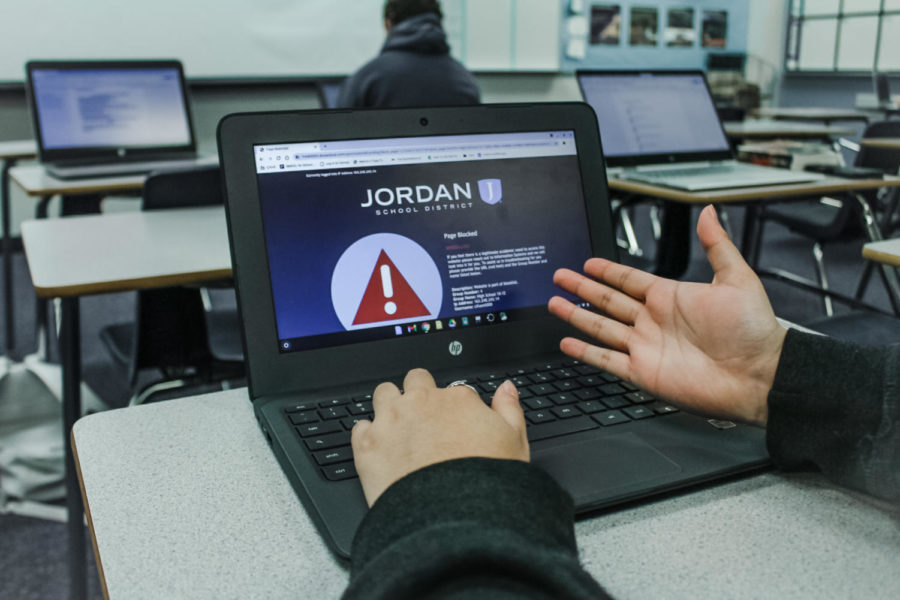 Copper Hills high students have become frustrated when clicking on a resource and “Page Blocked” pops up instead of the expected site needed. Jordan District has increased its web filtering but are unable to realize the stress that it’s causing students and teachers.

Two sites often used by students and teachers but have been recently blocked are, Weebly.com and Quizlet.com. Emma Lalaian and Meridien Grandpe, both Concurrent Enrollment students, have completed projects where their teachers suggested making an eportfolio. Weebly.com is commonly used by high school students when creating a website, which makes completing assignments that require websites more challenging.

Not only is this hindering productivity in the classroom to most CE students, but Grandpe said, ”There have been a couple times where a teacher has wanted students to access YouTube to watch a video relevant to class. While at school, I am unable to do what has been asked of me.” The web filtering is inhibiting students from using resources for educational purposes and not allowing teachers to do their jobs.

Mckenzie Catten, who teaches European history at CHHS, stands firmly alongside Grandpe about the issue of students not being able to learn to their full extent. She says, “I tried to find this specific speech by Hitler to kind of show the way he talks and kind of his nationalism, and I got blocked from Hitler speeches, blocked from Mussolini speeches; I also got blocked from Churchill, so I guess they’re evening out, but it’s a part of history.”

“I am more stressed all the time and have no time to relax. If I had access to these sites during class, I would be able to complete the work during school hours.“ Grandpe said. Frustrated, she further explained how as a full time student, trying to juggle work, school, and extracurricular activities, she has had to push back plans and spend unnecessary time to finish work that could’ve been done at school.

With these barriers, students have found a way to get around them by using hotspots, VPNs, and their own unlimited data. Muto explains that they are trying to block these hotspots and VPNs so the content filtering can work properly. Although, he suggests a simpler way to not have this issue and says, “Let the teacher know and give them the specific URL. They can email our department (Informations System) and we will take a look at it and see why it’s getting blocked, and we can get it unblocked so you guys can have access to it.”

This web filtering is done by a group in the Jordan District that looks over all sites being accessed on the District’s network. Anthony Muto, Jordan District’s Network Service Manager, says that any sites that contain pornography, violence, guns, and anything violating the Student Data Privacy Laws will be blocked. He said, “In the past, we’ve received complaints that students had been accessing inappropriate content, and so we look at the situation as a whole and determine what needs to get blocked.” He mentioned that sites such as Weebly, has inappropriate content but the program that blocks it can’t target specific things. Either they block the whole platform or leave it alone, which doesn’t seem to be an option.

The inappropriate actions few students chose to make has brought consequences district wide for students and teachers. These consequences have deprived students from the fullness of education teachers want to give, which has also created low productivity in classrooms by not having access to needed resources. As Lalaian said, “I think the district needs to look closely to see if the website they are blocking is helpful or doing more harm than good.”