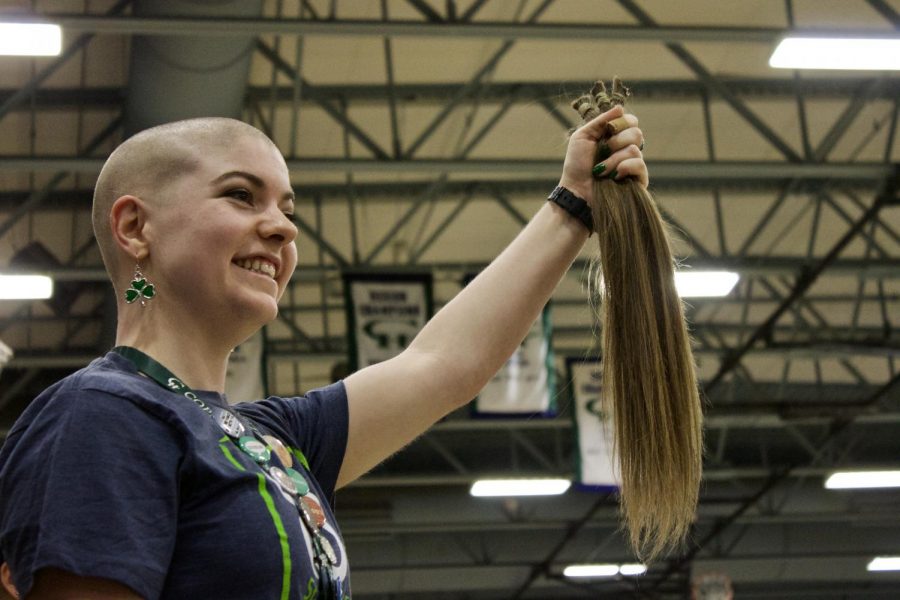 English teacher Amanda Tibbitts was one of a handful of faculty members to shave her head.

Students, faculty, and members of the community gathered in the big gym on Monday to remember and fight for those who had struggled or were going to fight the battle with Cancer -in the St. Baldrick’s Assembly.

The St. Baldrick’s Foundation for Childhood Cancer Research is an organization that has gained notoriety not just for the thousands of dollars they have raised for children’s cancer research, but for the shaving of heads of those willing to support others. Over a dozen grizzlies showed their support at the assembly by losing their locks.

One Grizzly who could not be present, who tragically passed away last weekend from a sudden and aggressive battle with adrenal cancer, was English teacher, Michelle Szetela. Szetela had been the first teacher to volunteer to shave her head and the first to put a fundraising bucket in her classroom. Newspaper adviser, Steve Haslam sat in for his close friend Szetela in one of the final shavings of the event. “Michelle had asked me to shave my head for this a couple of months ago,” he said, “and like an idiot, I said no. I will never turn down a request like that again. Cancer has taken my best friend.”

Copper Hills students raised well over the $2,000 requirement to hold the event. The school has many grizzlies currently fighting the battle and will likely host similar events in the future. To find out how you can support St. Baldrick’s, visit: www.stbaldricks.org.